Winding Down – halfway through a story

Posted on October 17, 2017 by saschaillyvichauthor

I’ve already discussed in part, my love of chess and continued desire to get back into a routine of playing regular games, both in bullet, and long game form.  I like stretching my mind, and that game makes me think.

It does nothing for my imagination on a writerly level that’s apparent.

Thing is, I’m on the other side of the halfway point for “Riding Tempest” my MC Fae/Vampire Paranormal Romance. I should finish that very soon!

A few years back I discovered old game console emulators. I’d found a handful of games as I used to play as a teenager and earlier than that and begun downloading them. What?  It’s not like the producers didn’t make their money back in the 90s with that shit!

Besides, it’s not like you don’t know my moral compass isn’t as…high as some.

Anyway, I started playing random shit. Mario Bros.  Street Fighter II, then I wondered if the gamecube had an emulator and I managed to find a copy of Resident Evil 0.

This to me was gold.

(For what it’s worth, I did own/legally purchase those games when I lived at home!)

When I was playing Resident Evil 0, I was working on Her Male Slave (I’m pretty sure that was the book at the time) or my foray into paranormal romance. The game had brilliant layout, a decent control system but I’ll mention my disclaimer: I’m not a gamer.  That would be the middle girlfriend and she’s more into the technical aspects of shit than I will ever be.

What really caught my attention was the detail to graphics and the storyline.  Yes, it’s tired. Humanity is getting erased by Big Pharma (essentially) or being used for control purposes and zombies are the natural outcome. First question:  How come I didn’t see this trend in publishing? Oh wait, I was riding it out.

I’d even tried to read a zombie romance that came out a few years later. Ju

st FYI, it, and was terrible. Completely awful.  Imagine Sex in the City, and all the shit it did to set women back 100 years, only now we’re talking about four bimbo zombies. Or zombie bimbos…not sure which really but both seemed pretty accurate.

But the visualization and graphics, the soundtrack, all of the elements of surprise that can go into a horror video game just kept fresh in my head for a long while. After I left Texas and moved in with my ex in California, I used the training facility in Resident Evil 0 as the exact mansion in Endangered and the soon to be released follow-up, Cursed. When I did the rewrites on Cursed, I had to move things around and remind myself of the layout, and that there were a few rooms in Resident Evil 0 that had other purposes than just killing zombies.

The funny thing was trying to imagine how that room would look with actual lighting, considering in the game the only light that remained on was maybe a candle? If not, it was the moon glaring in through the window.  I’m pretty sure I’d used this same room in Endangered when Josef broke away from Livia, almost killed Marianne, (who did I base her on?) and went after attackers by jumping through the window, shifting into a wolf and taking off. 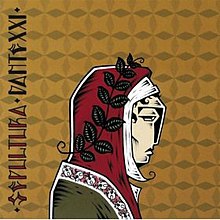 I remember much less of The X-Files game but it had the same sort of content as Resident Evil 0.

I find my inspiration from weird shit.

I’m still hoping to write a romance version of Dante’s The Divine Comedy, all because Sepultura had an album called Dante XXI. That, along with A-Lex were great concept albums.

Suppose I could share a small excerpt from CURSED since it’s going to be released before the end of the year!

Istvan watched Joséf study Livía and then something occurred to him.  Istvan had watched Joe do this a time or two before with his opponents, but that magic came to him in the middle of fight or flight and gave him an intense perception from an energy perspective.

This was not that.

Isabella’s worry wasn’t just broadcast on her face.  No, the frown real, but the scent she gave off smelled of bittersweet melon.  Shame too, because her disappointment wasn’t a detractor like her attitude was, but he had no idea of the full dynamic here.

He grabbed her and forced her to look at him.

Bold move.  He’d never do that shit with Kissa.  Istvan knew firsthand how stubborn the little wolf queen was, and had tasted her fury before.

He wasn’t lying either when he said Joe didn’t allow Kissa to follow, she forced her way. Which he supposed was her right.

Livía opened her mouth to respond, but stopped short.  A quick sniff of the air clued Istvan into her sickness.  He’d detected bitter, old dirt and earth, almost as if rust filled his nostrils and made them flair.

“Even for the undead, I can tell she’s definitely not well, Joe.”

“Don’t you think I can tell that in my mate?”   Joséf pushed back from Livía slightly, caressed her cheek.

Would his typical behavior show?   Or would he revert to what he’d been like before he and the pack had come to terms?

“I’m surprised you couldn’t feel it from here.  I tried to not let her broadcast so much.”

Livía’s stare on Isabella would have made a lesser woman cringe.  Instead, Isabella stood her ground, hands on her hips.

“I had no choice.  He can’t fight a two front war, Liv.  No one can without coming out scarred.  And we both know he’s already jagged enough as it is.”

“I resent that.”   Joséf growled and Istvan watched another set of posturing begin.  He needed to keep this from escalating, else his Alpha become distracted.

“What?”   He spun around, clear ire in his black and silver irises.  “Everyone’s been trying to baby me but the fucking pack.  I expected different upon my return.”  Joséf’s energy started to rise, his temper a proponent of that magic.

The wolf magic was very much tied to feelings, emotions. Joséf had, as far as Istvan had known, never been one-hundred-percent stable.  “Calm down.  We can deal with things one at a time.  First, why are we here?”