Posted on June 1, 2016 by saschaillyvichauthor 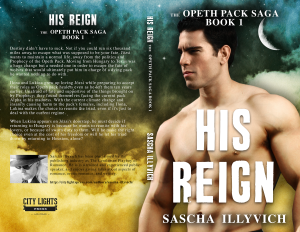 Thought I’d drop this out for you folks. I have the print gallery on my desk and it’s time to share.  THIS is the final home for The Opeth Pack Saga – my Menage series dealing with a legendary wolf pack from Hungary.

The inspiration for the series started out as me being disillusioned with the ending for the anime “Wolf’s Rain.”  I liked the series, but it was so heavy and the moments of happy were fleeting, as were the moments of hope for the heroes.  SPoiler alert, shit breaks bad, very bad.

Eventually I’ll update the actual Wix site with new covers and more fun facts but for now, here’s the cover for the PRINT release!

Oh, and don’t forget, the book is LIVE on June 2nd, so grab your copy on AMAZON and have it delivered then!

Blurb:  Destiny didn’t have to suck. Not if you could run six thousand miles away to escape what was supposed to be your fate. Józsi wants to maintain a normal life, away from the politics and Prophecy of the Opeth Pack. Moving from Hungary to Texas was a huge change but a needed one in order to escape the fate of wolves that would ultimately put him in charge of a dying pack he wanted nothing to do with.

Ilona and Lukina grew up loving Józsi while preparing to accept their roles as Opeth pack healers even as he left them ten years earlier. Unafraid of fate and supportive of the things brought on by Prophecy; they found themselves facing the current pack Alpha in his madness. With the current climate change and insanity causing harm to the pack’s females, including Ilona, Lukina makes the choice to reunite the triad, even if it’s just to deal with the current regime.

When Lukina appears on Józsi’s doorstep, he must decide if returning to Hungary is because he wants to reunite with his lovers, or because of sworn duty to them. Will he make the right choice even at the cost of his freedom or will he let his triad down by returning to Houston, alone?