Posted on May 21, 2014 by saschaillyvichauthor 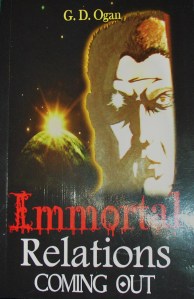 This is from pages 65-67 of “Immortal Relations” http://amzn.com/B006ZCBT6G first of my currently three-book Paranormal-Romance Series. Maggie, a female vampire and Gary, her lover, recently changed into a male vampire are being joined by her eighteen year old virgin vampire adopted daughter Evy, for her first experience in explicit togetherness.
I found myself flat on my back on the table this time with Maggie straddling me; controlling how and when she planned on taking my essence. She was having fun, bringing me close and then backing down. I think she was showing Evy how to drive me out of my mind when it was her turn. Maggie finally looked down on my quivering body and moved forward, stepping over and off the table putting her hand up in the air, which Evy slapped in the style of a wrestling tag team match. Evy flew up on the table like Maggie had straddled me. Since there had been no foreplay with her she took a while to be able to take me in. If anything, it heightened my level of punishment not wanting to hurt her and thus not being able to find completion. But she started to warm up and allow a little penetration, then greater still, as she got more into the process. In a few more minutes, she was in full passion, and I was feeling my passion peaking as well. She controlled the joining like she had more experience than she had, perhaps because of the observations and training she had gained from Maggie and me. Finally felling waves of her internal contractions I met her coming with my own release; then she slowed and gently lowered herself to lay on me.

We stayed in that position for quite a long time, as she was in control, and I felt it best to allow her to finish the experience when she wished. Maggie wasn’t the type to hover, although I knew she was anxious to know that all was fine with Evy and that everything was alright with me as well. Perhaps she was concerned, because she didn’t allow me to find release with her. She recognized and appreciated  that I was allowing Evy to finish at her own pace. Suddenly, Evy released, jumping over me and rushing into the bathroom. We could hear her retching into the unused toilet. Retching wasn’t normally something vampires did so we were both more than concerned!

After Evy was able to come back into the room and seemed to be all right, we got dressed and decided it was time to talk to Grandmother* about Evy’s retching. Of course, Grandmother knocked on our door before we even had time to open it to go and find her; I think she’d felt the distress Evy experienced in the bathroom. Maggie invited Grandmother in and, she had no sooner set foot inside than Evy seemed to turn green, whirled around and ran back into the bathroom. We all looked at each other concerned by not sure what to do next. Grandmother went in with Evy and comforted her, until the bout of internal turmoil ended. Grandmother then asked Evy to take off her cloths so an inspection could be done.

Evy appeared both shaken and vulnerable as she lay, spread eagled on the table. Grandmother ran her fingers across Evy’s body, probing her and there, and placed her ear low on Evy’s belly. Maggie and I looked at each other.

Evy had genuine fear in her eyes. Maggie, being the only one in the room who’d experienced a pregnancy was the first to voice what I had wondered but dismissed as impossible.

Grandmother answered Maggie immediately after she postulated her theory. “Yes, Maggie, I think you are correct! As impossible as this should be, I believe Evy is indeed pregnant!”

I felt as if my jaw would hit the floor. Evy continued to look scared, confused and sick all at the same time. Sure enough she was back in the bathroom before any of us could react and we waited many hours before she would come out!

I asked, “Grandmother, how could she be pregnant?” With her well-known sense of humor intack, she raised an eybrow at me with a sly smile on her face. I shook my head and said, “You know I’m aware what causes a pregnancy but I’m just asking how she, a vampire, could be pregnant because I thought that was impossible. Also, shouldn’t it take a while for a pregnancy to be recognized?”