Raining Kisses – Book 2 in the #OpethPack Saga is out!

Posted on January 25, 2014 by saschaillyvichauthor

After slaughtering Katarina’s brother and father, along with a handful of other wolves who tried to abuse them, Nicholaus realizes his true darkness and decides to leave Hungary to keep his lovers safe from him.  Relocating to Albuquerque, New Mexico, Nicholaus made a life for himself where he controlled the shots until the Opeth Pack messenger shows up with one of his lovers, requesting his assistance back in Hungary. 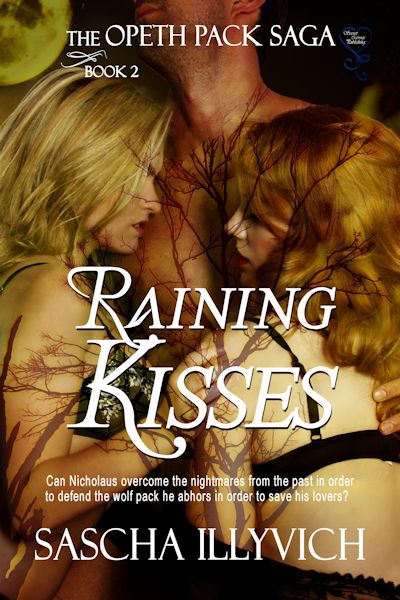 heart, or will his lack of control make him return to the States, alone forever?

The idea of losing his temper again and potentially killing those he loved frightened him.

“Nicholaus, get your ass back here!” Krystyna shouted. “We’re not finished yet!”

Krystyna could be such a demanding bitch when she wanted to be. Still, he ignored them both and continued into the dense foliage, hoping he could dash through them and sprint back to town undetected.

Slinking along the ground, he crept slowly toward the bushes.

“I will come get you. I smell you, you selfish bastard. Get back here!” Krystyna yelled louder. He pictured her angry eyes, mouth hung open and fingers trembling.

Nicholaus knew he’d blown his chance. Krystyna would come after him. He sluggishly made his way back toward the front of the house. Stopping, he knew better. He was asking for trouble if he went back to his two lovers, knew his heart was asking to be loved. The problem was that he couldn’t stay here in Hungary. Not with them, not with the pack that had fallen apart. He had to leave.

“Nicholaus, get your ass back here and come face us!” Krystyna stomped toward him.

“Please, Nicholaus. I…” Katarina sounded like she was on the verge of tears.

Nicholaus couldn’t bear to hear her cry. Standing on two legs again, he walked out front to the main road. “I’m here,” he sighed heavily.

“Why would you disappear on us again after the three of us are reunited?” Katarina ran to him, tears in her eyes. “Why would you do that to me? Again?”

He had no response.

“He’s an asshole, like the rest of the Opeth Pack males.” Krystyna uncrossed her arms and drew Katarina to her.

He shook his head. “It’s easier to run when I know what’s best for you both.” The words came out a whisper but both women heard him loud and clear.

“But,” Krystyna’s lip trembled, “you don’t know what’s best for me or her. You don’t know, Nicholaus. You have no idea,” tears streamed down her face, “how much we’ve suffered without our third and binding partner.”

Nicholaus looked at Krystyna. Her face showed little emotion but he caught the desperate need for completion in her eyes. She could never totally hide her feelings from him. Hell, it was blatantly obvious what she needed, desired most. Too bad she had no idea what she was truly asking for.

“You’re a wolf. Embrace what you are, Nicholaus. You did what you had to in order to protect us. I forgave you a long time ago.”

Katarina’s sweet words hit his heart with the force of a tank. He didn’t want to embrace what he was. He’d killed before in cold blood. He’d murdered her brother and father right in front of her. It didn’t matter that they were trying to rape her. There had to be another solution if he had just thought long enough about it.

“You’re going to have to get over the past someday, Nicholaus. Even I let shit go after a while.”

Krystyna reached for him but dropped her arms and looked at Katarina.

Something was up between them.

The look that passed between them made him pause. “What are you two thinking?” He narrowed his gaze. Sniffing the air, he now smelled the pungent fragrance of arousal coming from both of them.

They turned, eyes wide and filled with an emotion deeper than lust and so much more than love. Krystyna and Katarina sauntered to him, each of them flanking him on a side.

“Love us,” Katarina begged. Her breath whispered softly over his ear, sending shivers up and down his skin.

Krystyna nodded. “You promised my lover something and you should own up like a man.”

Nicholaus growled at the challenge. He couldn’t take the torture of both his lovers assaulting his senses, putting him on the defensive and overloading his mind and body. He sucked in a breath, trying to drag air into his lungs but when Katarina leaned into him, pressed her lips against his and cupped the back of his head, he found he could only take in her aroma.

Krystyna’s hands found his shoulders, pulling him closer between them while she dropped fiery kisses all over his neck, drawing her tongue over his flesh.

Goose bumps appeared on his skin, the hair on the back of his neck stood and his cock throbbed. Heat built in his loins. His struggle to free himself was a loss, once both pairs of hands held him captive.

Only it wasn’t because he couldn’t overpower his lovers. Trembling beneath the love and fury of their emotions, Nicholaus could only feel. Frozen by the love given to him, he let himself enjoy the sensations of two pairs of soft lips pressing onto his skin, dragging down his face or neck.

He’d grown painfully hard by now. When a hand caressed his erection, he nearly jumped out of his skin. He opened his eyes to see Katarina’s hands treading over his stomach, feeling the ripples of his abs. Krystyna’s palm cupped him.

He blinked, saw Katarina’s ruby red lips moving toward his. Leaning into her, he tasted her lips, sucked in what air he could, finding it full of her luscious scent and the spicy tang of Krystyna’s arousal. Knew that when the two were together, their aromas mingled instantly, remembered just how it used to be when they were younger.

Pulling back from Katarina, he found Krystyna’s teeth working over his flesh, exciting the animal within. “I’ve got to taste you both,” he uttered between kisses.

Katarina’s mouth was velvet soft while Krystyna’s lips upon his neck burned him to the very core.

He stiffened between two sets of skilled hands caressing him, moving over his back, shoulders, down his abs, all while Krystyna kept her hand over his cock. He didn’t want to want them both, knew he needed to stop them, but the weakness in his knees only helped to drag him further into ecstatic lunacy.