Posted on September 5, 2013 by saschaillyvichauthor

We kicked it off late Thursday night once I landed and was escorted to the hotel by two of my fabulous readers.  In fact those readers are in SF this month to put on a play, more details about that in a moment. 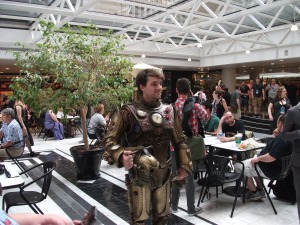 Friday morning had me getting my badge from a friend I knew off Fetlife, then had me roaming around until 5ish where we had the cigar herf.  I missed the hotel, thought we were on the Hyatt smoking deck.  I was told No, I said Hilton and if anyone knows the layout of that area you know it’s practically a pain in the ass to get to by going through the Marriott, so I went around.

Cigar smoking resumed, scotch was consumed, then I met up with author Cassidy Kindgston, who was scheduled to be on our Friday night panel.  Aliens and relationships, which “I” moderated *cough* if you can call it that.  The original topic was supposed to be slightly different but with DragonCON being what it is, and authors being who they are, we had to alter things for the panel to make more sense.  Kiernan Kelly, Adrienne Wilder (Sp) and crew rocked it.

BDSM/GLBT Books in Literature…I sort of went off.  On a particular famous author.  They said it was because I was drunk. Sadly, no.  That’s not it.  Stress, vehement annoyance, and more stress…but the rest of the panel kicked ass.

Then I disappeared, ended off doing gods know only what…oh wait I found another one of my readers and we snuck off for some personal time.  She’d become a great friend along with a hell of a supporter since I met her last year at Frolicon and she wanted to discuss a number of things to push my books, plus just chop it up old school because we hadn’t seen each other since Frolicon and I needed to seriously reconnect with Katie Sparkles.

Saturday, woke up late, made it on time to the Social Media Panel moderated by author Anthony Francis.  (You can check out his work here) and covered a LOT of ground on dos and don’ts of social media.  Btw, I had a ham sandwich.

Showed up LATE accidentally (I blanked totally) on the Pronoun Hell panel so T. C. Blue moderated and kicked ass.  And yes, I stand by what I said.  She’ll deal.  *snicker*  Then off to a third panel that day.  I progressively sobered up as the day went on LOL!  Seriously, we had the WriteSEX panel with the same as above mentioned, only Stella Price joined us in the fray to answer questions and cover important points on how to write and function in the business of Erotica.

In those first few days it was pretty awesome, unfortunately I didn’t get to bed until 6 AM in most cases.  I do have to send a special shout out to not only my fellow panelists, but my readers, my kinky non industry friends and loved ones for helping me during what’s actually a pretty stressful time of the year, especially now.  As to why I can’t reveal, but I’m about to move to Charlotte, NC.

Ponder that for a minute.

Me.  In the South. Now I’m FROM Texas but we’re not really the South. We’re Texan.  Moving in with my mentor Morgan Hawke for a few months, I need the creative recharge.  And to put some things back on straight again.  But that’s another blog post.  I have some great news, a free book coming out VERY soon, which will be a surprise to ALL of us if you’ve been following my career and stance on certain aspects in the publishing industry but I’m learning a LOT still, after 14 years.

This free book will be a menage featuring two very sexy hunks and one incredibly mouthy yet sensual woman, based on an old friend who wanted her story told…so I wrote it.  And now I’m selling it…

Excerpt to come later this week!