How I DO aliens…by Jessica E. Subject

Posted on August 1, 2013 by saschaillyvichauthor

Today’s guest post comes from the fabulous Jessica E. Subject and is rather interesting!

Yes, I know the title sounds sexual, but that’s part of the post.

I want to talk about writing aliens. For those who don’t know my books, I write science fiction romance and some contemporary romance, ranging from sweet to sexy. I know there’s more to Science Fiction Romance (SFR) than just aliens, and have some SFR stories that include clones as well, but today, I’m talking aliens.

Now, in SFR there seems to be two sides of the coin: those who say that if life on other planets exists, there is very little chance that aliens would be humanoid, and others who write aliens to resemble humans to keep them relatable.

Me? Well, the aliens in my stories are humanoid. While I don’t disagree with the other opinion, there is a reason I write fiction.

I can’t say all of the aliens in my stories are humanoid though, mostly just the heroes or heroines. It makes their passionate moments much easier to write.

And here’s a description of some of the humanoid aliens from my stories:

He smiled, some of his confidence back while his human image flickered for a few seconds before completely disappearing. Unsure what to expect, she tried not to judge until she’d set eyes 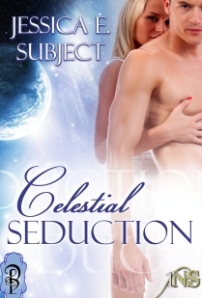 on his entire figure. Long, spindly fingers intertwined with hers. He tried to let go, but she held them tight. His body appeared taller and leaner than before. She saw the same black eyes, a less prominent nose and barely visible ears. His hair became jet black and appeared longer and curlier than before. Underneath luminescent scales, his skin shone a light blue.

“So, what do you think?” His mouth quirked, revealing his uncertainty.

Except for their color, his lips were the only thing that didn’t change. She leaned towards him, wondering if they would still feel the same. She had to stand on the tips of her toes to reach him, but wrapping her arms around his neck helped. The feel of his skin surprised her. Perhaps he didn’t have scales, but the pattern lay beneath his skin.

Mare and Cael in Crash Landing

But unlike any beings he had ever seen on the vids of Earth, the guy had blue skin. Not his deep, almost indigo shade, but lighter, closer to the color of the water he’d landed in. Long blond hair flowed over his shoulders, onto his muscular chest.

Prince Aris in An Unexpected Return

Walking into the silky rear-end of an oroke, she came to an abrupt halt. The creature had been walking at a steady pace and then stopped. She’d failed to notice in time. Wiping fluff off her face, she turned around and walked into another hard body. “I’m so sorry.”

Hands clamped down on her arms. “Are you all right?”

She stared up into deep brown eyes. Chewing her bottom lip, she nodded. If this man hadn’t been holding on to her, she would have fallen to the ground. The word swoon held no meaning for her until now.

Am I only like this because of the eletin I inhaled back home? Or was there something more she found heart-racing about the blue-skinned, well-muscled hunk of an Otarian who held her up?

Jake (as a young alien) in Alien Adoration

He had the biggest black eyes. Her parents always told not to stare, but his eyes were just so fascinating, so different than anything she’d ever seen. They contained no white, only darkness.

So, how do you like your aliens? Would you rather read about the humanoid type or do you prefer creatures that would make you want to run?

Jessica Subject is the author of contemporary and science fiction romance, ranging from sweet to erotica. In her stories, you could meet clones, or a sexy alien or two. You may even be transported to another planet for a romantic rendezvous.

When Jessica isn’t reading, writing, or doing dreaded housework, she likes to get out and walk. Fast. But she just may slow down if there is a waterfall nearby.

Jessica lives in Ontario, Canada with her husband and two energetic children. And she loves to hear from her readers. You can find her at jessicasubject.com and on twitter @jsubject.

9 Responses to How I DO aliens…by Jessica E. Subject