Posted on January 4, 2013 by saschaillyvichauthor 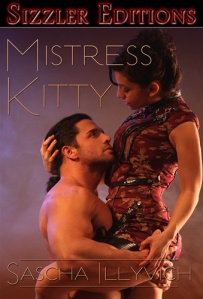 “An unhealthy submissive is a useless submissive.”
A code that Mistress Kitty lives by in this interesting collection of stories penned by the author. According to the introduction, these stories were created by the author when she was submitting works to the list Males In slavery Stories. These did not fit the list. They are also not the usual thing where the Female Dominant “was a bitch, liked to beat her slaves, senselessly, etc.” as the author puts it. This author wanted to do something different where romance plays a strong role and the couple is just a little bit kinky.
She certainly succeeded and the romance comes through loud and clear. As does the kinky and the entire project works. Space limitations preclude me going into great detail about each of the twelve stories. Each one has elements of romance as well as bondage including the use of a certain instrument named Allison, various other fetishes, and often are holiday or seasonal themed.
See the full review here