Posted on December 13, 2012 by saschaillyvichauthor 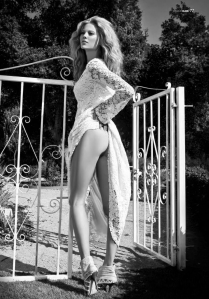 ~~~Soon to be out from Sizzler Editions.  Bound After Midnight features hot paranormal romances by Sascha Illyvich, Bonni Sansom and Margie Church

Solan, the warrior, has battled for  most of his life, fighting for Goddess only knows what on a planet devoid of beauty, letting a string of words guide him until he’s wounded gravely wounded in battle.  A woman, perhaps an angel, or demon, comes to his aid with one goal in mind.Fulfill her destiny and his:

Solan woke, his body thrumming with sexual need.  Gone were the aches and pains he’d experienced from battle, but memories would remind him of his fights.  He survived off those thoughts, images.  The sights and smells of battle surrounded him, hardened his resolve.

Shifting his weight, Solan recalled the previous events and found himself in soft place, a warm bed.  He balled his fists carefully, then unclenched them.  Toes wiggled, legs moved, he had full use of his limbs.

The limb he hadn’t used in months remained painfully erect.

Solan looked around the room, saw how empty it was.  A chest of drawers sat against a stone wall. To his left, a fire crackled in the pit.  The moon cast beams of light on the ground through the one large window.  Funny, he thought vampires would want closed walls to protect against sunlight.

He laughed at the concept of the sun’s rays reaching the ground.  Where he’d been, thick black smoke and soot blanketed the skies.  If the vampire kept him in a different part of the world, where was he?

He’d fought long and hard against those who would destroy the earth.  He’d struggled to remain free.

He stiffened when he remembered her singing to him earlier.  He drew the sheet across his skin, became aware of his partial nudity.

The door beside him creaked open.   Katherine came through the threshold floating gracefully, rather than moving.  She stopped at the bed and smiled.  Her dress was similar to the one she wore last time he saw her, only the darker purple color brought out the exquisite hue of her eyes. The dress hugged her breasts, leaving nothing to the imagination.  Tapering at the waist, the hem dragged on the floor and swished with each step she took.  Her hair had been pulled back but strands hung down over her shoulders.

He wanted to move her hair so he could again see her ruby lips, her enchanting eyes and her wondrous smile.

The lilt in her voice made his cock throb.  “Only one ache I need to resolve…”  He let the sentence hang, hoping he wouldn’t offend her if she did catch his meaning.

He should be afraid.  She could bite and kill him.

What purpose would that serve?  Heal him, then kill him?

Maybe she needed him at full strength in order to feed.

She tilted her head.  “Your mind races, but you do not act on your body’s instincts, Solan. Why not?”

Solan cocked a brow.  “Whatever do you mean?”

“Just as women have a scent for lust, so do men.  Yours is subtler because of your injuries.”  She sat beside him.  Gently, she slid her hand against his naked arm.

Her skin was soft and smooth, cool to the touch. He wanted to take her.  Staring into her eyes, he felt the pull, but not a vampire’s magic.  This power ran deeper, stronger.

She leaned in closer, hovering over him.

He went rigid, though he forced himself to speak.  “You could overpower and drain me dry, vampire.”

She blinked, her long eyelashes fluttering caresses over his cheek, “I suppose so.  But…”  Katherine nuzzled his cheek with hers, breasts crushed against his chest.  The soft fabric of her dress reminded him of his lack of a shirt.

His groin hardened even more.

Carefully, she moved up the length of his body until their eyes met.  Hunger in Katherine’s eyes reflected the mood he found himself in.

Her lips pressed to his in a light caress before she pressed harder against him.

Her hand found the back of his head, lifted it to her and pressed harder into him, deepening the kiss.

Thrusting his tongue into her mouth intensified her taste.   Soft curves surrounded him.  Her fingernails trailed down the length of his arm, stopping at his wrist.

He broke from the kiss and stared at her.  Reaching for her face, he cupped her cheek, ran the pad of his thumb along her jaw line.  “What…are you doing?”

Katherine blinked again, offered him a weak smile.  Her mouth moved, no sound came out.

“Do you want to sate me?”  His words rang out in the empty room. “Do you want me, Katherine?”

Need flashed in her eyes.  Flames of desire appear to lick her skin as more shadows danced over her flesh.  “I do.”

He moved out from under her and rolled her onto her back, “We do this my way.”

In seconds, she lay flat on her back, pinned to the mattress.  He straddled her, the hem of his kilt lifted slight, exposing his thighs.

She hesitated to touch him, even as her surprised expression changed to lust.  Her eyes remained half open, mouth parted.  “Take me if you have the desire.  Sate your needs with my body.”

Solan didn’t remember when last he’d spilled his seed in a woman’s womb.  “Yes, I will.”  He almost growled.

Katherine shifted beneath him so his erection would settle between her thighs.

He ran his hands up and down the length of her sides before drawing her arms above her head.

Her submissive nature surprised him.  Despite her strength, she moved with him, let him position her where he wanted her. She remained soft and tender as any human woman.

He held her wrists with one hand, noticed how small they were.  Delicate bone structure, he decided.  Her breasts jutted up at him, pale sculptures with nipples the color of dusty roses.  With his free hand, he traced a finger over her exposed flesh, enjoying how she shuddered beneath the slightest touch.

“I’m sorry,” he groaned, and ripped the top of her dress, exposing round, creamy breasts.

Before she responded, he lowered his mouth to her breast, took a nipple in between his teeth and scraped his tongue over the tight nub.

She sucked in a hard breath, arched beneath him and cried out.

He pulled the puckered nipple deeper into his mouth while grinding his hips into hers in a rhythmic, rocking motion.

Hands caught the hem of his kilt, lifted the thick material up.

Solan moved from one breast to the other, dragging his tongue over heated flesh.

He popped her other nipple out of his mouth, the sound echoing loudly.  “I thought vampires were cold to the touch.”

Her hair spilled over the pillow in a glorious blanket.  Solan ran his fingers through the silky soft strands, amazed at how his arousal throbbed from such a simple act.

Her mouth curled up in a bow, “You have stirred something in me, szeretőm.  My flesh is heated by your…affection.”