Posted on December 1, 2012 by saschaillyvichauthor

It seems these folks LOVE giving away books and prizes to lucky readers, and I just can’t stay away from the hop.  We’re celebrating Julie Kenner and her new release TODAY!

From 12/1-12/10 Random House readers can hop from blog to blog for a chance at these fabulous gifts:

An excerpt from A Christmas Favour (different one!) can be found below!

Two Years Before
Christian looked at the two wine glasses, plates and silverware sitting on the table around a large, stuffed turkey. The aroma of apple pie baking in the oven wafted through the kitchen and dining area along with other scents.
He smiled at Angela. She really had outdone herself this year, even if it was just the two of them together again.
Taking two of her candles from the mantel over her fireplace, he brought them to the table along with her lighter.
Angela tilted her head and glanced at Christian. “What are those for?”
“Tradition.” He lit the candles then poured a glass of wine for Angela and another for himself.
“Oh, that’s so sweet of you.”
He reached for her and let a finger caress her cheek.
Her breath caught in her throat, and he smothered a smile at her telltale reaction.
“Let’s eat.” Chris reached for the knife and began to carve the turkey.
Some time later, almost too full to move anymore, he forced his body up and cleaned the kitchen for Angela. He took the pie out of the oven and set it on the counter to cool. The second bottle of chardonnay chilled in the refrigerator. Two glasses sat in the freezer, chilling as well. Chris built a fire in the fireplace, pulled Angela to her feet and hugged her, feeling her warmth against his own body. His erection nudged against her belly. He wanted to act on it, but it seemed somehow inappropriate.
“Wanna snuggle?” He set his dishtowel down on the table.
“Sure.” She smiled, and her eyes lit up like stars.
Settling against the back of the couch, Christian let her slip her arm behind him.
Slowly, her fingers began circling a spot on the small of his back.
“Hey, Angela, work on my lower back, too.”
“Gladly.” Angela grabbed his shirt, lifted it over his head and tossed it aside. Her mouth dropped when she saw how built he was. “Wow.”
Christian looked over his shoulder to see her eyes wide, mouth dropped open. “What…?”
She touched him, placing her hand flat against his skin. 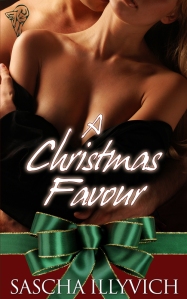 Get it at:
Barnes and Noble
Amazon
Or Total E-bound!