Posted on July 14, 2012 by saschaillyvichauthor 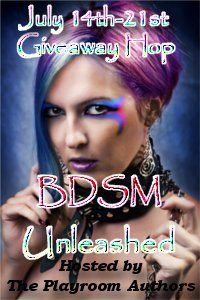 On this hop, we have a plethora of authors willing to showcase their craft, turn you on, tie you up and delight you with a selection of offerings from their catalogs, including mine.

Notable titles of mine include:

Surrender to Love
In order to cure the dreaded creative rut she’s in, Livia ends up in Las Vegas by suggestion from her therapist. Oh and there’s a catch. Livia‘s been set up to have a one night stand with a very handsome man who promises her freedom through submission. Can she surrender to more than just passion?

Forced Pleasure
Two more romantic tales of bondage from your humble author are served up in this collection. In Forced Pleasure, we have the struggle between want and need as Francine looks to help her relieve Micah’s stresses in a most unusual way only to realize that her lover Nick has plans of his own to handle both of their hearts. In Sweet Submission, Gawith is happy with his new kinky, poly family but the one thing that dogs him is the mistake he made with the woman who captured his heart.  Samantha is the perfect submissive, older, caring, loving and into the Lifestyle with just as much gusto as Gawith.  But his mistake could cost him the one thing he needs in order to be complete. BDSM tales in their own right are romance stories, though not always told in the typical fashion or given the typical outcome.  But to those who understand What It Is That We Do, there is a beauty never missed.

I Will Submit to You, Master
Mistress Jackie is a strong Domme, but Master Collin is stronger!  Can he convince her to give into her true nature as a submissive?

Siddella’s Surrender (A Ditter Tha Great favorite!)
Kinky Faeries with a Taste for B&D! Siddella, Thief of the Low Court of Faery, discovers she’s stolen something very valuable to the cybernetic ruling class. Crashing a party, she doesn’t realize that the Black Angus, Faery’s legendary guards are present. With voracious sexual appetites that make modern BDSM players cringe, she fears the Black Angus will find out her one most personal secret along with the data she stole. Lord Frika has organized the Black Angus in an assault on the cybernetic ruling class of the Unseelie Kingdom in an attempt to begin reversing the damage computers and technology have done to Faery. Seeing Siddella, he realizes that this little party crasher is more than just a thief and that she holds the key to not only restoring Faery but to his heart. Can an thief who values freedom fall in love with a fierce fighter with a taste for chaining his lovers and then degrading them in every way he can imagine? Can the two them work past personal issues to save Faery from a fate worse than death? Or will her forced surrender be too much for the Faery to handle? “A powerful look at domination!” -Sensual Romance Reviews