Posted on September 13, 2011 by saschaillyvichauthor

E-books eros is discounting my books! Use promo code: Illyvich-eros-53128 at http://bit.ly/pbAGST for 20% off!  This was what I came back from Vegas to see in my inbox.  I think it’s a wonderful idea that hopefully helps us both out.

Erotic Authors Association’s inaugural convention was pretty sweet actually.  Got a few photos but nothing special.  I ended up in a few laps…but only got a few of those photos and those were private *wicked grins*  Hanging out with Cecilia Tan and Lori Perkins was great, talked some business, got to poke at Lori’s newness in certain arenas and just have a solid time.  The few panels I did pop into provided nothing new to me but did give solid information to the slew of new writers that attended the convention.  Oh and meeting Laura Antiniou was AWESOME!  If I were a dyke or trans something the fuck or whatever I’d want her to show me more than the ropes!  She has a mouth like me *snicker*  I’d say the Honey Badger was in full effect here!

DragonCON wore me out previously though. Five panels, with me moderating two out of the three we were allowed had me worn out but we gave our audiences quality information.  The writers Kiernan and I chose for these panels have outstanding careers, backlists galore and as mentioned, are accessible as authors to their fans.  Working with Kiernan Kelly is always a pleasure.

Then there was the Debra Dixon panel.  OMG!  I was on a panel with Deb Dixon, Venessa from Loose ID, Nancy Knight and a few others.  Lucienne’s vampire plushy was cute 😉 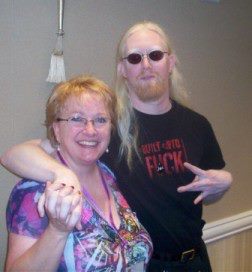 Only having a day of rest between the two shows sucked but thanks to my handler at DragonCON I was able to relax Monday and somewhat Tuesday before my flight back to California.  I’d like to send a special shoutout to Melissa, Ladonna and Zombie Bill for their continued support, love, adoration, help and all they’ve done for me.  Now if I can just survive post con depression, otherwise known as Con Drop.  That feeling of utter emptiness after days of chaos and closeness to people you really bond with…

It didn’t hurt that I got to beat myhandler with toys for taking such good care of me. Such a lovely bottom!  That helped get release out for both of us, despite the fact that famed Ellora’s Cave author Marianne LaCroix almost walked in on us.  Not that it would have mattered. She would have either joined or gone to sleep.

No one goes to sleep when I’m beating them LOL! It’s called RESEARCH, baby!

Meeting Lisa Omstead of Decadent Publishing at EAA Con was pretty neat.  And Valerie Mann is a an author I’d like to get to know more aobut, along with Kate Richards, whose books you all should check out.

3 Responses to Sale on Sascha Illyvich books at E-books Eros!