Posted on May 9, 2011 by saschaillyvichauthor

While I like the cover of this book, it’s not my favorite to come out of Sizzler Editions. 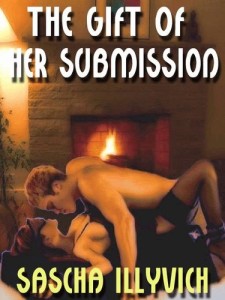 It does say everything I was trying to convey in the three stories about love and breaking free of the past while embracing a new way of being from a strong dominant.

First off, the cover is to me pretty great.

It fits, the women in both stories are bound by old behaviors and beliefs but more so is Francine, the beautiful yet older woman who is trying to control Micah and her Nicholas. But Nicholas sees a need in her and Micah that needs to be acknowledged.

The story came about while talking to my producer about a funny predicament in her life during the latter part of Fall of 2010. Essentially it’s a tribute book to her because I do love her and hopefully even though her story involves an unplanned four way, it hopefully should be an expression of that love.

Just like Gift of Her Submission. Tell me, for those who have read both, what do you think?